We’re in the middle of a heatwave. Kind of.

19°C would have my mate in Southern California reaching for an extra sweater, but for Scandinavia in the middle of April it’s positively balmy.

END_OF_DOCUMENT_TOKEN_TO_BE_REPLACED

Steamed Asparagus In A Garlic Vinaigrette

Asparagus. Those delicious spears divide the population like no other vegetable.

No, not because of its taste, because of, well, you know, the other thing.

END_OF_DOCUMENT_TOKEN_TO_BE_REPLACED

Sunny days in February are often not what they seem.

From the comfort of your living room, all may appear splendid outside, with the sun sitting majestically in a clear, perfect, cloudless, azure sky, but the truth is that in the world beyond the double glazing, it’s still freezing.

END_OF_DOCUMENT_TOKEN_TO_BE_REPLACED

We’re now in the period that we call “Mellandagarna” in Swedish – literally “The Between Days” – that curious hinterland between Slade’s “Merry Christmas Everybody” and Abba’s “Happy New Year”.

It’s a festive trough between two gigantic peaks, and when it comes to food, quick and easy are doubly important, as people stagger around, dazed and confused, some semblance of normality returning to life, before we all jump back on the merry-go-round, and it all kicks off again.

END_OF_DOCUMENT_TOKEN_TO_BE_REPLACED

This dish was kind of half-inspired by a post by Dana over at “I’ve Got Cake.”

I first read that post during a moment of extreme weakness, when I was in that awful no-man’s-land between breakfast and lunch. God, it looked good.

Fast forward a few days, and our local hypermarket unexpectedly had some broccolini in. Three quarters of the people who shop there will scream and run away if they see unfamiliar vegetables, but the rest will buy them for the sake of buying them and to bolster their bourgeois credentials, so I had to move fast.

END_OF_DOCUMENT_TOKEN_TO_BE_REPLACED

“Here you go, then”, said Mrs. Paleovirtus, casually dropping a slab of frozen venison mince into our shopping basket. “See what you can do with that!”

“How fortuitous”, I thought to myself, for that very morn I had come across a recipe that would suit that particular ingredient down to the ground.

What I had in mind was Mini Meatloaf “Muffins” with a vegetable purée “frosting”.

This idea was inspired by an article by Katie, aka the “Wellness Mama”, which can be found here.

On the presentation side – here we used a “standard” sized muffin tin, rather than an “American” or “large” one, which meant that the meat came out shaped more like a slightly flattened, large meatball, rather than muffin-shaped. Our local supermarket sell very reasonably priced large silicon muffin-moulds, which might make for a better meat-muffin.

Another slight niggle regarding the presentation – the cauliflower “frosting” was just a bit too runny to hold its shape once piped onto the top of the muffins, something that’s going to require a bit of further research.

As far as the taste goes, we were more than happy there. Our one thought – the mildly gamey, almost lamb-like flavour of the venison mince might work slightly better with different herbs, spices and seasoning. The definitive Swedish go-to recipe book, “Vår Kokbok”, has quite a few recipes for venison, which might give us some interesting ideas on that front. 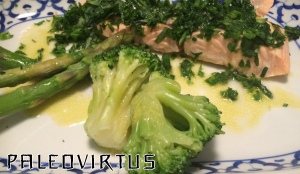 Steamed salmon with asparagus and broccoli

Salmon is, as we all know, ridiculously good for you.

This recipe is also quick, simple, and yet still something that wouldn’t be completely out of place at an informal dinner party.

Again, this version was inspired by chef Daniel Green’s book “The Paleo Diet – Food Your Body Is Designed To Eat”.

What? You don’t have a copy? Why not? It’s brilliant! Order a copy instantly!

Seriously though, folks, it is, sans doute, the best Paleo cookbook I’ve come across.

Meanwhile, back at the recipe…..

As part of my project to use up all my outstanding food stocks before moving, I found myself round at my old place with what initially seemed few options available for the speedy, eat-and-go lunch I needed to prepare, devour, and clean up after between hectic bouts of packing, cleaning, and rubbish slinging.

However, after a quick visit to the local supermarket, I was lucky enough to get my hands on cut-price, quick-sale, use-by-date-reached tomatoes, asparagus, and cucumber.

This was a fantastic fit with the two rashers of bacon and single, solitary egg I had sitting all alone in the almost empty fridge.

The asparagus was simply trimmed and steamed, the bacon microwaved on my wonderful crisper plate, and the egg hard boiled.

The last drops of olive oil in a bottle, the sad remnants of a lemon, a sprinkling of black pepper, and the scrapings from a packet of Indian spice mix chaat masala took care of the embellishments.

Not too bad a result, with a few pennies saved into the bargain. Well done me, I say! Hurrah!

I suppose one day, somewhere around the time that we notice that the street lights are still on when we are eating our breakfasts, and dark early evenings seem to leap out of nowhere at us, we might finally tire of salads, and instead of reaching for the salad bowl, we dust down the slow cooker and start to fantasise about stews and casseroles again. Not today, though.

Yet another quick and easy throw together, packed full of all my favourite flavours of the summer, perfect for an almost unbearably warm early-August late-afternoon.

Important definition – let’s be absolutely crystal clear from the get-go regarding what we mean with the “H” word here, mes amis….

Right, now that we’ve cleared that potentially embarrassing source of confusion up, let us continue…

In terms of this dish, those two phrases are about as stunningly accurate as saying that the Sun is large, spherical, yellow, and rather hot. Food…chopped and mixed…confused mess… Indeed.

In the children’s classic book “The Wind in the Willows”, Mole and Rat find themselves facing the prospect of a hungry night at Mole End, until they happen across, amongst other things, a tin of sardines.

Not only are they a great “on-the-road” food, but sardines are also fantastic as a standby ingredient to have in at home “just-in-case” – I always have a tin or two lurking somewhere in my cupboards. Tonight was one occasion when I was glad that I did…!

I did not want to cook tonight, at any price – at the very outside I was up for a bit of chopping, cutting, and mixing. Likewise the thought of foraging at our local “super”-market left me cold. I went straight home from work, determined to make the best of whatever I could find hidden in the fridge and freezer.

As it turned out, I found some bits and pieces that just about worked together, well, at least well enough for me to want to finish eating it!

To go with my tin of sardines I found 4 spring onions, which were thinly sliced, greens and all, and put into the mixing bowl with the drained and flaked sardines. I luckily had a green chilli that needed using, so that was finely chopped before joining the fish and the spring onions.

Next up, I found some forgotten but still serviceable green asparagus, which was trimmed and then lightly steamed (fret not, dearest reader, for t’was in a minimum-effort-involved microwave steamer bag!) for 2 minutes, before being cut into quarters. The tail end of a cucumber was roughly chopped, as were 2 medium sized tomatoes. Last but not least, I found half a savoy cabbage that would have to have been binned tomorrow, so after being thinly shredded it too was steamed, 3 minutes being enough for it to retain a bit of crunch, but still banish the chewy-blues.

Seasoning seemed best covered by a generous dusting of black and cayenne pepper.

Giving this assemblage a good mix and a toss may well have helped along its flavour and texture a bit, but as sure as cute little brown baby bear cubs go potty round the back of the Redwoods, it certainly didn’t make it any more photogenic than it started out as, namely “not in the slightest”, hence no photo.

In fact, so un-photogenic was it, that not even Leonardo himself could have crafted a canvas capable of flattering it. This was, mes braves, no feast for the eyes, but rather a “cease and desist” order to the Hunger Demon.

Lords, ladies and gentlemen, boys and girls, let’s hear a nice big round of applause for the humble sardine….!

The culinary shenanigans of a Paleo-eating, Asian food loving Englishman, living in Scandinavia. Expect gallons of Chinese tea, Swedish coffee so strong it can tarnish stainless steel, exotic spices, delicate, fragrant herbs, and plenty of fish. And chillies. Lots and lots of chillies. Clicking here would probably be a good idea if you want to find out a bit more, actually.

Some what? We might have it in…have a rummage around

If I were you I’d also have a peek at…

Cooking with a Wallflower
PALEOVIRTUS

wellness at its core

Ingredients for a Beautiful Life!

Addapting a Paleo lifestyle in this crazy world that we now live in...

Tips for how to budget and live frugally

Stop being a follower!!!